Visit the Farquhar Honors College Fellowships and Scholarships webpage to view a comprehensive list of national and international distinguished fellowships and scholarships mentored through the college.

Students interested in learning how a distinguished fellowship or scholarship may fit into their academic program and goals should contact Don Rosenblum, Ph.D., Dean of the Farquhar Honors College, at (954) 262-8402 or DonR@nova.edu.

The NSU Farquhar Honors College encourages high-achieving undergraduate students of all majors to apply for a variety of national and international distinguished scholarships and fellowships. These awards can offer graduate education funding, enhance recipients’ professional applications, provide career opportunities, and facilitate a lifelong network of contacts.

“Students who pursue a distinguished fellowship gain life-changing skills and lifelong professional connections—whether or not they secure the fellowship,” said Don Rosenblum, Ph.D., dean of the Farquhar Honors College.

“There’s a strong sense of community amongst the students being considered for these competitive awards. Being selected as a NSU nominee or interviewed as a semi-finalist is an affirming experience that supports self-confidence and future success for these students.”

Qualifying students interested in applying for these opportunities receive guidance and assistance through the application process from faculty and administration in the Honors College. Visit the Honors College Fellowships and Scholarships webpage to view a comprehensive list of national and international distinguished fellowships and scholarships mentored through the college.

For alumna Kristina Christoph, living in Spain for one year as part of the Fulbright English Teaching Assistantship Program was an opportunity to explore the world beyond the classroom before pursuing seven years of graduate work and a career in dentistry.

After graduating from NSU with a B.S. in Biology in 2008, Christoph moved to Spain where she taught English to elementary-school children and conducted research on the country’s health care system.

“As an undergraduate student, I had a strong desire to study abroad,” said Kristoph, D.M.D. “Living in a different country and integrating into a new culture seemed like such a wonderful opportunity. It was also appealing because I knew I had a long academic road ahead, and taking part in a unique international experience seemed like a great way to enrich my academic career.

“I was very focused, however, on doing well in my biology coursework. Before I knew it, I was applying for dental school. I had learned about the Fulbright Scholarship through the NSU Undergraduate Honors Program and I thought this might just be my opportunity to embark on an international adventure before returning to intense academics.”

Christoph applied for the English Teaching Assistantship, which is a form of the Fulbright scholarship that serves countries on almost every continent and provides teachers at a range of educational levels. The main component consisted of serving as an assistant teacher in primary school classes that were taught solely in English by non-native English speakers.

“My tasks included assisting the teachers with lesson plans and class activities and engaging the students in conversation,” Kristoph said. “The teaching aspect of the scholarship appealed to me because I love working with children. I also found it very rewarding to help the teachers improve their English.”

The second component of the scholarship consisted of carrying out an academic project in an area of personal interest. “Since I planned to pursue a health care profession (dentistry), I was interested in studying the Spanish health care system. With the Fulbright’s backing, I was able to volunteer in a Madrid hospital, interview members of the health care team, and take classes at Madrid’s medical school.

“The Fulbright English Teaching Assistantship was the perfect fit for me because it allowed me to blend my passion for working with children with my interest in health care.”

Upon her return from Spain, Kristoph enrolled at the Harvard School of Dental Medicine where she graduated with a Doctor of Dental Medicine (D.M.D.) in 2013. In June 2016, she completed a three-year orthodontics residency program at the Baylor College of Dentistry at Texas A&M University.

“Seven years after my Fulbright experience, I have finally completed my academic career,” Kristoph said. “My Fulbright year was definitely the most enriching part of my academic journey. The fact that it was so different from the academics of dental school allowed me to build on skills that were difficult to learn in the classroom.

“I learned to engage with individuals of different backgrounds and find commonalities between us. This ability is certainly helpful in relationship building with patients. My Fulbright experience taught me the importance of knowing about a patient’s life story and tailoring treatment approaches to their needs.”

In addition to participating in the Undergraduate Honors Program, Christoph served as president of NSU’s Pre-Dental Society and the Tri-Beta Biological Honor Society as an undergraduate. In her senior year, Christoph was named Student of the Year at the Student Life Achievement Awards, and she was recognized at the 2008 Commencement as an Outstanding Student.

“My recommendation for those interested in applying for a Fulbright is to begin the application process early to allow enough time to develop a compelling project idea and to receive helpful feedback from NSU faculty,” she said. 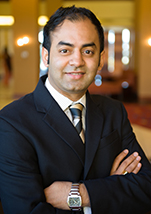 As an undergraduate, Sunil H. Patel’s goal was to pursue a career in medicine. With the encouragement of an NSU professor, he applied for and was accepted into the 2001 Barry M. Goldwater Scholarship and Excellence in Education Program.

Bestowed to students nationwide in the fields of math, science, and engineering, the scholarship was established by the U.S. Congress in 1986 in honor of the former U.S. senator from Arizona and 1964 Republican presidential candidate.

“Applying for and obtaining the scholarship helped me gain self-confidence because the scholarship is ranked among the top in the country,” said Patel, D.O., who was honored by NSU with a Distinguished Alumni Award in 2011.

“Being a Goldwater scholar has provided me with an opportunity to [advance] in all stages of my career so far. It has been the main topic of conversation during my various interviews for medical school, residency, and fellowship training.”

At NSU, Patel was a life science major and a participant in NSU’s Dual Admission Program who graduated with a Bachelor of Science degree in 2002. He earned a Doctor of Osteopathic Medicine degree at the Chicago College of Osteopathic Medicine at Midwestern University. He completed an internship in internal medicine at the University of Massachusetts, followed by a fellowship in nephrology at Kansas University Medical Center.

Today, Patel is a board-certified internist practicing nephrology and operating the Advanced Medical and Kidney Institute in Apple Valley, California. He specializes in general adult medicine and kidney-related disease processes.

“My inspiration for applying to this scholarship program was Dr. Robin Sherman,” Patel said. “She recommended that I apply because she felt I had the aptitude for this scholarship…funded by a foundation in honor of Senator Goldwater who believed in the advancement of society based on scholars, particularly in the fields of science, mathematics, and engineering.”

Sherman, Ph.D., professor and associate dean at the NSU Halmos College of Natural Sciences and Oceanography, said Patel was a student in the first class she taught at NSU.

“What impressed me most about Sunil was that he was willing to work very hard to achieve his goals,” Sherman said. “Work didn’t have to be easy for him. If it was hard, he just worked harder. I think that’s why I recommended him for the scholarship. I knew that he would put together a great application, but I also knew that he would never let me or NSU down when it came to representing us at the level of this prestigious scholarship.

“We’ve kept in touch since he graduated from NSU, went to medical school, did his residency and fellowships, got married, and started a family. It feels so good to see that I had some influence on his success,” Sherman said.

Following her career in law enforcement, Carolyn “Renae” Griggs was eager to turn her life in a different direction. When she enrolled at NSU, she was a non-traditional student in her mid-30s who had been working as a police officer since she was 21.

Within a few years, Griggs became the first NSU undergraduate student awarded the prestigious Harry S. Truman Scholarship, which supports graduate education for students who demonstrate leadership potential and a commitment to public service. As a Truman Scholar, Griggs was able to pursue graduate studies in forensic psychology at John Jay College of Criminal Justice in New York.

Sixteen years later, she still reaps the “spectrum of benefits” of being a Truman Scholar, citing credibility, opportunity, and a network of support. “I’m still part of a community of people who are ready to help a fellow scholar,” said Griggs, who completed a B.S. degree in Psychology at NSU in 2000 and was selected as the student commencement speaker for her graduating class.

“The Truman Scholarship is a gateway to extraordinary opportunities. Being part of this caliber of professionals is an extremely powerful stamp of credibility. It has put my resume at the top of a pile more often than I can count and given me an edge in numerous competitive landscapes.”

“Being a Truman Scholar can get you through doors that would otherwise be inaccessible,” Griggs said. “Through the Truman Scholarship, I was introduced to other prestigious scholarships and fellowships. In addition, there is access to White House internships and other government appointments, higher-education opportunities abroad, and stepping stones to coveted public service positions in the U.S.”

Stephen Levitt, LL.M., associate professor at the NSU College of Arts, Humanities, and Social Sciences, remembers helping Griggs with her scholarship application. “Renae was very committed to finding solutions for police officers who had suffered trauma,” Levitt said. “She was a student with a mission, and this mission inspired or guided her actions.”

In the years after graduation, Griggs worked as an advocate for victims of domestic violence, including those within the police community. She relocated to a farm in Central Florida, where she worked as a holistic wellness coach and cared for animals in need.

Recently, Griggs was introduced by a Truman scholar to an alumna of another scholarship program in Colorado where Griggs is relocating, and considering merging her counseling skills with animal therapy.

“How do you put a value on that?” Griggs said of the scholar connection. “I’m very grateful.”

Visit the Farquhar Honors College Fellowships and Scholarships webpage to view a comprehensive list of national and international distinguished fellowships and scholarships mentored through the college.

Students interested in learning how a distinguished fellowship or scholarship may fit into their academic program and goals should contact Don Rosenblum, Ph.D., dean of the Farquhar Honors College, at (954) 262-8402 or DonR@nova.edu.