Commencement Profiles:
The Stories Behind Some of the 2013 Graduates

The road to graduation is different for every student at NSU.

Some have overcome the challenges of adapting to a new country, learning a new language, or rebuilding a life shattered by a devastating injury. Others have drawn inspiration from their parents’ example of hard work and determination to become the first members of their families to earn a college degree. All embark upon a new future when they receive their diplomas.

Click on the names below to read the stories behind a few of the graduates of NSU’s class of 2013. The Undergraduate Commencement Ceremony was held on May 11. 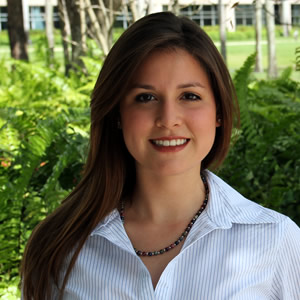 Getting an education began twice for Catalina Breton—first in her native Colombia and again when she moved to the U.S.

“I was nine years old when we emigrated from Colombia. Both of my parents were dentists, yet they decided to come to this country to give our family a better life,” said Breton, a member of NSU's Undergraduate Honors Program who graduated with a Bachelor of Science in Biology and minors in both chemistry and behavioral neuroscience.

Starting over in a new school in a new country meant learning a new language and adopting a new culture. But, Breton was determined to make her education a priority—inspired, in part, by her father’s decision to return to college in the U.S. so he could rebuild his dental career in this country. She even planned to become a dentist like her parents.

During her sophomore year, Breton was working two jobs while carrying a full course load, including some Honors courses. Along the way, she said, “my childhood dream of becoming a physician resurged.”

Changing her academic focus led to Breton’s participation in the International Human Cadaver Prosection Program at Indiana University School of Medicine—Northwest, an opportunity for select students at NSU. This hands-on experience and that of caring for her father following his open-heart surgery in 2011 convinced her that pursuing a career in medicine was the right choice.

“His recovery provided me with more strength to keep doing what I’m doing—and eventually become a physician,” said Breton, who plans to pursue a bio-medical graduate degree and attend medical school.

“Having experienced a difficult medical situation from the perspective of the patient’s family gave me a world of insight. I realized with certainty that there is no other profession that suits my personality and captures me more than medicine. With medicine, you know there’s a lot of sacrifice.

“My dad was a great inspiration. He worked his way up in this country. At age 54, he re-validated his dental degree. He had to finish three more years of college. It was amazing to see.”

Father and daughter shared that graduation—Breton graduated from high school at the same time her father completed his studies at NSU’s College of Dentistry. At the 2013 Commencement ceremony, her father watched as Breton continued her family legacy of higher education in the health sciences.

“Sometimes life doesn’t turn out ‘typical,’ but when you’re surrounded by wonderful people such as my parents, atypical is just as good.” 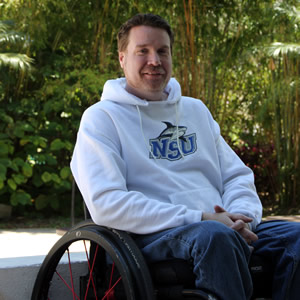 Scott Earley had dreams of becoming an actor when a car accident 15 years ago resulted in a spinal cord injury that left him without the use of his legs.

Earley, who also suffered a dislocated hip, shattered femur bone, and other injuries, spent three months in a coma, a year in the hospital, and underwent multiple surgeries.

But it was after the accident that he rebuilt his life—battling depression and moving in and out of nursing homes—a transformation that will culminate with his graduation from NSU with a Bachelor of Science in Psychology and a minor in behavioral neuroscience.

Four years ago, while living with his mother in central Florida, Earley decided to go back to school. After transferring to NSU in 2012, he found his purpose and discovered what he wanted to do with his life. Earley now plans to continue studying toward a doctoral degree in rehabilitation psychology. His goal is to work with patients who are disabled, injured, or ill, as a way of giving back to the community.

“I want to be an inspiration to someone who is newly injured or ill and who thinks that life isn’t going to be the same anymore,” Earley said. “I want to tell them, ‘yes, there’s a transition period. But after that period, there’s a whole new life you can experience.’ It’s like wiping the blackboard clean and starting anew.”

Earley’s challenges and struggles didn’t end at the classroom door. Prior to the accident in March 1998, he had worked as a stockbroker and television producer. Psychology was a new path.

“When I started at NSU, I thought it was too difficult. I was going to quit. What kept me going was my motivation to give back—to do whatever I had to do to go out there and help people in my situation. Second was the support of my friends and family,” said Earley, who is the first in his family to graduate from college with a bachelor’s degree.

“I didn’t think I could do this. But I have learned a lot about myself and how different injuries and illnesses affect the body. Academically, it was tough but the college prepared me for what I wanted to do—which is to go to graduate school. I’m prepared to make that sacrifice.

“I’ve been privileged in the ability to live two distinctly different lives in one lifetime. I had the opportunity to sit and reflect on my life. In the worst of it, I prayed for death,” he said. “I want to take the message farther and show people that the disability is not a curse—it’s an opportunity and a challenge to do better than what you did before.

“It has challenged us to look at life in a different way and appreciate the life we have.” 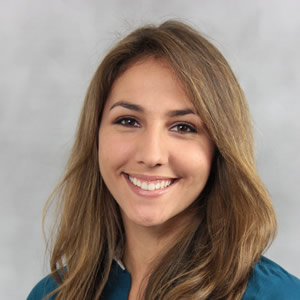 Having graduated with a Bachelor of Arts in Communication Studies, Kelsey Marie Cortez is aiming for the stars. She plans to pursue a career as a director in film and television.

“My family is made up of generations of musicians and artists who have instilled in me a love of creativity and freedom of expression,” said Cortez, who also earned a minor in international studies. “I love people and their stories. I knew I wanted to pursue a career as a filmmaker when I realized I could express their stories through cinema and not feel like I was working at all. I would love to travel and document my experiences through video.”

A participant in NSU's Undergraduate Honors Program, Cortez was named one of the Outstanding Students of the 2013 graduating class.

In 2010, her film Life Unmentioned won first place at the college’s annual Undergraduate Film Festival. She has worked as a production assistant at NSU’s Digital Media Production, as a creative writer for Sharks United Television, and as a contributing writer for NSU’s student newspaper, The Current.

“When I began college four years ago, I wanted to be a writer, then a journalist, then a television producer. My goals consisted of making the most of my college experience. During my time at NSU, I tried to apply what I learned in and out of the classroom in my everyday life.”

There were challenges along the way.

“A close family shares burdens,” said Cortez, who lives with her parents, siblings, and grandmother. “I always saw myself going to college and getting a degree. It takes persistence. There were times when it was difficult to see the fruits of my labor, and getting through a difficult class or semester was the main priority. Looking back, I gained more than I realized. The people I met, the friends I made, the trials I overcame and the knowledge I acquired—everything came together.” 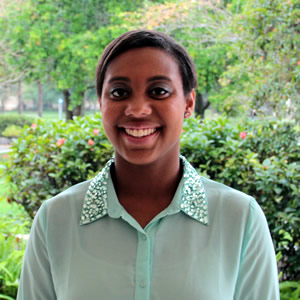 Dashka Gabriel has left NSU with life lessons and funny stories, like the time she was chased across campus by a raccoon whose ‘dinner’—a McDonald’s wrapper—was stuck to her shoe.

“I’ve never run so fast in my life,” said Gabriel, who graduated with a Bachelor of Arts in Communication Studies and a minor in theatre. Gabriel was a member of NSU's Undergraduate Honors Program.

“Going to college was never a question,” she said. “My mother is a teacher. My family has always been a motivation. They’ve kept me grounded throughout my college journey. My older sister inspired me to take risks and really go after my true dreams.”

Those dreams include moving to New York, enrolling in graduate school, and eventually working as a communications director, possibly in the entertainment industry, and opening her own public relations firm.

“When I began college four years ago, I was intent on earning a degree in communication studies that would be applicable to the journalism field. Now some of my dreams and goals have changed,” Gabriel said.

“The biggest challenge I faced was learning to balance all the aspects of college life while becoming a young adult, student, leader, friend, employee, daughter, and sister. When you break down all the roles you play in the lives of others, you realize there’s a lot of responsibility to carry on one plate.

“Over time, you learn what’s important. You learn to prioritize and how to appreciate little gestures of kindness and moments of fun. Through every lesson, I’ve grown up and become a better, stronger, and more confident person.

“Starting life after college is going to be a whole new experience, but I feel prepared and confident.” 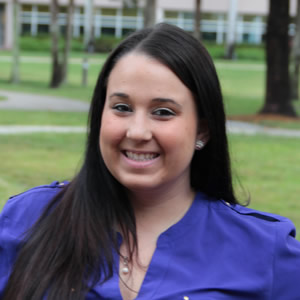 When Brittany Schemtob began her college career, her goal was to become a surgeon. But after starting classes at NSU and getting involved in campus life, she discovered her true passion.

“When I began college four years ago, my dream was to become an orthopedic surgeon and work with injured athletes,” said Schemtob, whose own high-school soccer career ended with an injury.

“That dream of becoming a surgeon lasted until midway through my sophomore year when I started questioning if I really wanted to be a doctor. Then my goals and dreams changed. My goals now are to make the most of my graduate school experience and learn everything I need to become a director of student activities one day.”

Schemtob, who was a member of NSU's Undergraduate Honors Program, changed her major from biology to psychology. “After coming to NSU, I discovered that my real passion was working with college students. It was tough and scary to make the switch, but I’m so glad I followed my heart. That will never lead you the wrong way.”

The oldest of three children, Schemtob is the first member of her family to graduate from college—a goal instilled by her parents.

“I really wanted to set the standard for my siblings and make my family proud of me,” she said. “Being the first person in my family to graduate from college wasn’t about adversity. My dad helped me understand the importance of hard work. He was always the top salesman in his company. My mom was always a proponent for education—not going to college was not an option for me.”

Having graduated, Schemtob now plans to attend a graduate program in college student personnel at the University of Tennessee, Knoxville. She will pursue a career as a director in student affairs, an interest she discovered while working as a student orientation leader at NSU and participating in student government.

“You have to understand people to be able to work with students and to help them grow. Some days, you are a counselor,” she said. “I enjoy watching students make decisions and helping them through decisions. When I was a sophomore orientation leader, I saw freshmen come in and I’ve seen how much they’ve changed and grown. I know I have changed.”