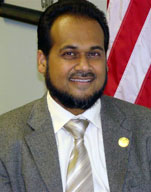 Nova Southeastern University proudly welcomed Altaf Ali as the first guest of the 2007-2008 Distinguished Speakers Series. Ali spoke at Convocation, the annual ceremony that marked the beginning of the academic year. At Convocation, the student body and the faculty joined together in anticipation of academic excellence and shared intellectual pursuit. Convocation was held on Tuesday, September 4, 2007, at 4:00 p.m. in the Miniaci Performing Arts Center. The reception took place at the Dr. William S. Spears Courtyard Atrium in the Carl DeSantis Building.

Altaf Ali is the Executive Director of the Council on American-Islamic Relations, Florida Chapter. Born in Georgetown, Guyana, in South America, Ali moved to Florida, where he earned a master's in social work at Florida International University. At FIU, he headed the Muslim Association, the Student Social Work Association, and the Phi Alpha Honor Society. Ali worked hard to forge greater understanding between Muslims and people of other faiths, while earning the distinction of top student in his class and the lifetime award from the university. He received the Social Worker of the Year Award from the National Association of Social Workers and the Outstanding Individual Community Service Award from the FIU Honors Council in 1997.

Ali has also worked to bring relief to the homeless and others in need.

Ali worked for the Florida Department of Children and Families for six years as a family services counselor supervisor, overseeing a department of service providers.

Currently, Ali is the Executive Director of the Florida Chapter of the Council on American-Islamic Relations (CAIR), which works to defend the rights of Muslims in Florida. Ali has spoken to the media, including CNN, NBC 6, ABC, PBS, and CBS, about a variety of issues affecting the Muslim community. The most prominent incident involved three medical students who were accused of being terrorists on September 12, 2002, and pulled over on the Alligator Alley section of I-75. CAIR FL secured the three students' medical rotations after negotiating with the hospital's CEO.

A frequent speaker at various community forums, civil rights events, university lectures, and governmental events, Ali took part in a video used to teach tolerance of Muslim students for the public schools of Broward County. He conducts many cultural and sensitivity trainings for the Federal Bureau of Investigations, The Florida Department of Law Enforcement, and others. Ali also participates in many interfaith dialogues and discussions. Ali is married to Jocelyn Pettitt and has two children: Noah and Saffiyah.