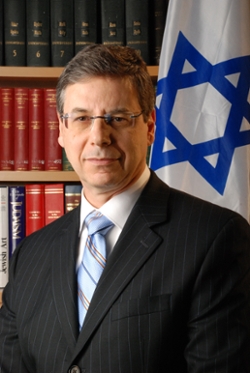 Israeli Ambassador Daniel Ayalon to Discuss “Challenges and Opportunities for the U.S.-Israel Partnership in a Rapidly Changing Middle East” at NSU

On March 28, 2017, NSU welcomed Ambassador Daniel Ayalon to campus as part of the Distinguished Speakers Series. This talk was co-hosted by NSU's Farquhar Honors College and the College of Arts, Humanities, and Social Sciences.

Ambassador Daniel “Danny” Ayalon is the president of Hod Ayalon Ltd., a private consulting firm for governments and international corporations. He is also the founder of The Truth About Israel, a nonprofit corporation that trains and educates the public about Israel. He is a member of the Board of Governors of Tel Aviv University and the Lantos Human Rights and Justice Foundation in Washington, D.C. He is also a visiting professor at Yeshiva University. Prior to this, Ambassador Ayalon served as a member of Knesset (the Israeli Parliament), Deputy Minister of Foreign Affairs of the State of Israel (2009–2013), and Israel’s Ambassador to the United States (2002–2006).

As Deputy Minister of Foreign Affairs, Ambassador Ayalon directed Israel’s foreign and economic relations, public diplomacy efforts, and bilateral strategic cooperation with key allies. He headed the Inter-Agencies Strategic Dialogue between Israel and the United States and spearheaded the diplomatic, economic, and international public efforts against Iran’s nuclear program. He directed the campaigns that enabled Israel to be inducted as a member state into the Organization of Economic Co-operation and Development and the CERN European Organization for Nuclear Research.

Ambassador Ayalon introduced a new agenda for Israel in the United Nations, and its agencies built on extensive cooperation to face global challenges related to food security, water availability, land desertification, and affordable energy. He initiated and formulated a new level of diplomatic relations between Israel, Latin American, and African countries, based on sustainable development. He served as Israel’s head of delegation to the Organization of American States Summits.

While Ayalon served as Israel’s Ambassador to the U.S., strategic, political, and economic ties between the two countries were deepened and expanded. Ambassador Ayalon played a leading role in securing the agreement for $10 billion in U.S. grants and loan guarantees to Israel, the Roadmap to Peace, the historic Exchange of Letters between President Bush and Prime Minister Ariel Sharon, and the bilateral trade that reached $20 billion plus $10 billion in investment.

Ambassador Ayalon holds an M.B.A. from Bowling Green State University and a B.A. in Economics and Labor Studies from Tel Aviv University.