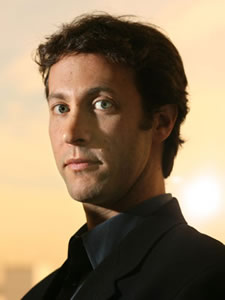 The Farquhar College of Arts and Sciences welcomed neuroscientist David Eagleman, Ph.D., as a guest of the college's 2011-2012 Distinguished Speakers Series. His talk, "Incognito: The Secret Lives of the Brain," was named after the speaker's latest book by the same name.

David Eagleman, a Guggenheim Fellow, directs the Laboratory for Perception and Action and the Initiative on Neuroscience and Law at Baylor College of Medicine. He is best known for his work on time perception, synesthesia, and neurolaw.

Eagleman is a New York Times bestselling author. His latest book, Incognito: The Secret Lives of the Brain (2011), explores the neuroscience "under the hood" of the conscious mind-that is, all the aspects of neural function of which we have no awareness nor access. His other publications include the fiction book SUM: Forty Tales from the Afterlives, an international bestseller published in 23 languages. Eagleman's book on the Internet and civilization, Why the Net Matters, is available as an iPad app and as an e-book.

As part of the college mission to prepare students for rich professional careers and active citizenship, the college frames co-curricular programs and experiences around a broad annual theme that unites our community in interdisciplinary exploration. The academic theme for the 2011-2012 school year is "Truth and Power." Eagleman spoke on this theme.