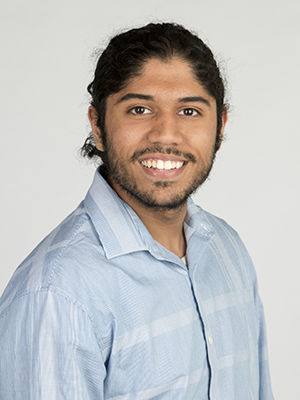 “If a candle can burn and its embers can glow

And what do we say when it turns into wax

Its form is all changed and its light is relaxed

Is it really the candle we knew once before?

And was it a candle to even begin?

Or is it a game our senses are in?

Do I know how to win? Now my head’s in a spin

And I know not what lies without or within

What if we’re sleeping and living in dreams

And all is not well and not what it seems

But then, I said, stop, and I cleared all the mist

I had to be real, I had to exist

If I could raise questions of you and of me

And ponder what is, then first I must be”

For Qaas Shoukat, the inspiration for his project and participation in the 2016 Undergraduate Student Symposium was simple: He wanted to share his love of history with his fellow students. Mixing biographical research with the aesthetics of spoken word, Shoukat explored the enduring legacies of playwright William Shakespeare and French philosopher/mathematician Rene Descartes by performing original poems in which he assumed their voices and spotlighted their ideas and bodies of work.

Shoukat’s dramatic performance before an audience of students and faculty—titled “My Life in Verse: Historical Figures Brought to Life”—earned him first-place in the Oral Presentation category of the symposium.

Hosted by the NSU Farquhar Honors College, the annual symposium showcases the outstanding scholarship of undergraduate students from all majors through poster displays, oral presentations, performances, and original short films. The projects are judged by faculty based on scholarship and presentation skills. 2016 marked the 15th anniversary of the event.

“I love sharing my excitement with other people,” said Shoukat, a biology major pursuing a minor in theatre and a member of the Undergraduate Honors Program. “The symposium was really an opportunity, given that my message is to spark people’s interest in history. When I present these poems, these are my own words and my own thoughts and ideas. I can express them any way I want. Doing that in front of a smaller audience, I can build a connection with everyone. I can showcase the impact of presenting information through new creative means.” 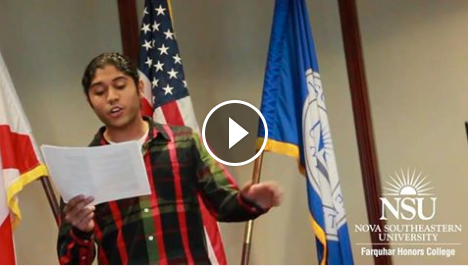 The genesis of Shoukat’s project began in high school when he read the works of Shakespeare and studied the existential crisis of Descartes. He chose these men as the subjects of class assignments, using poetry to explore the lives of historical figures including John Lennon.

“Reading King Lear as a senior, I found all these wonderful things in the theme and in the complexity of the way Shakespeare wrote. In history, when we talked about the Renaissance, we talked about enlightening ideas, and I liked Descartes right away.”

Participation in the annual symposium is based on a competitive selection process. In preparation for his symposium proposal, Shoukat chose to revise and revive two of his favorite figures using his theatre skills for storytelling.

“I wrote an outline and said, ‘OK, I want to talk about this and this, and how would I do that?’ I tried to find the linear path. Writing the outline wasn’t difficult because their lives have been chronicled. I knew what I was going to say. I started at their birth and ended at their death. But thinking of a new way to present this was challenging.

“My goal was two-fold. I wanted to highlight the contributions of these two people and say, ‘here is what they did and wrote and see how much you can relate to what they say.’ I want to make people think about that.

“The second fold is to make people think about history in general. If history is taught in an uninteresting manner, students are not going to be engaged. If it’s presented in a way in which they can relate, it will hold their focus and can be transformative.”

Christine Jackson, Ph.D., professor at the NSU College of Arts, Humanities, and Social Sciences, was Shoukat’s faculty advisor and worked with him closely in revising and rehearsing for his performance.

“Qaas already knew what he wanted to achieve with his presentation before I came on board,” Jackson said. “Through our rehearsal process, he cut a few sections, punched up a few others, and added the PowerPoint and a list of his resources. His joy in public performance and pride in his work are clear in every facet of this project.”

Born in Pakistan, Shoukat moved to Florida with his family when he was in eighth grade. Getting involved in theatre helped him make the transition to a new country and a new culture. His interest in science was sparked by his father, a physician who encouraged him to study medicine.

At NSU, he chose to major in biology. “But I always had a passion for theatre, so I chose to pursue that as a minor. Art and science both directly focus on the study of life, especially biology,” he said. “Art is the different perspective or the different approach to studying life. To me, it’s interesting, especially when I can find a bridge.

“I like exploring life through the lens of the scientist, which is very empirical and objective. Whereas in art, you can look at the same piece, and every look can have a different take. In both, form follows the function. That’s a direct bridge.”

After seeing Shoukat’s performance at the symposium’s awards luncheon, NSU President George Hanbury II, Ph.D., submitted a copy of the student’s Shakespeare poem to the Folger Shakespeare Library in Washington, D.C., where Hanbury had recently viewed an exhibit commemorating the 400th anniversary of the playwright’s death.

“Qaas Shoukat’s poem and performance are a shining example of the level of scholarly excellence and innovation showcased by our students at the Undergraduate Student Symposium,” Hanbury said.

In a letter submitting Shoukat’s poem to the Folger library, Hanbury noted the special efforts the library had taken to draw millennials to the exhibit to learn more about Shakespeare. “After hearing his poem, I thought it would make an excellent addition to the display at the library. You have to be a millennial to really appreciate it,” he said.

Shoukat hopes to return to the symposium next year.

“I want to do something different or maybe submit a scientific project and use my theatre background to present it in a different way,” he said. “Just being at the symposium and seeing other students’ research was interesting. Being in the same room with students who presented great technical and scientific research—and to think that I had a place there as well—it was very exciting.”

Click here to read about other NSU student experiences at the Undergraduate Student Symposium.