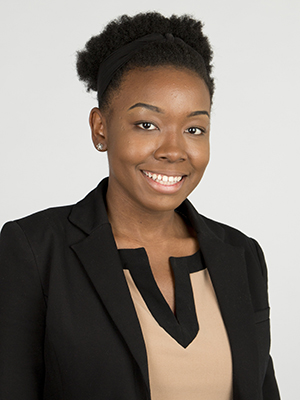 When Leigh-Ana Mumford began her research project, “The Linguistics of Terrorism,” as an assignment for a political science class, she had doubts about entering her work in the 2016 Undergraduate Student Symposium.

“If you got an A on the project, you had the opportunity to apply to the symposium,” said Mumford, a junior majoring in political science and pursuing a minor in international studies, whose research examined the changing linguistics of terrorism, those who engage in it, and how it fuels conflict.

Hosted by the NSU Farquhar Honors College, the annual symposium showcases the outstanding scholarship of undergraduate students from all majors through poster displays, oral presentations, performances, and original short films. The projects are judged by faculty based on scholarship and presentation skills. 2016 marked the 15th anniversary of the event.

“At first, I was worried because I usually get very nervous when I have to speak in front of a class,” said Mumford, who was seven years old when terrorist attacks struck the World Trade Center and the U.S. Pentagon on September 11, 2001.

“I remember my mom wouldn’t let us read of any of the newspapers or see any of the pictures. But I still found a way to learn about it,” said Mumford, whose father, now a retired Army officer, was deployed to combat terrorism in Afghanistan and other nations.

Under the guidance of G. Nelson Bass III, J.D., Ph.D., assistant professor at the NSU College of Arts, Humanities, and Social Sciences, Mumford explored “anti-terrorism rhetoric” in U.S. foreign policy during the past four decades, as well as the “evolving definition” of terrorism during the administrations of U.S. Presidents Ronald Reagan, George W. Bush, and Barack Obama.

“I had three topics in mind, but I thought the linguistics of terrorism would be something I could pursue over time. I thought it would still be relevant today,” said Mumford, a member of NSU’s Model United Nations team, which competes in U.N.-simulated conferences where students debate national security, peace-making, and foreign policy issues of global nations.

“I started off trying to define what rhetorical construction meant and then apply it to different administrations and how specific events molded what defined terrorism,” Mumford said. “I saw the contradictions, and it made me want to explore why a certain narrative was done. It wasn’t exactly the whole truth.

“I wanted to understand the link between this narrative given for terrorism and the use of so many soldiers being deployed. Just hearing about my dad’s experiences overseas and our experience of having him away from us gave me the passion that was behind my paper.”

So she began the research in fall 2015, nervous about a presentation.

“I had to present the paper in class at the end of the term. At that time, I wasn’t confident in my work, and I kept looking at my notes. I was thinking, ‘Do I really want to do this at the symposium?’ But the idea of becoming more confident and learning communication skills and having that encouragement from Dr. Bass really helped me.”

Participation in the annual symposium is based on a competitive selection process. “After I submitted my application, it was a sense of relief. I thought it’s going to improve my presentation skills. I didn’t need to make that many changes. I just had to memorize my notes and my paper and exert my confidence.

“I was memorizing my presentation and saying it over and over again. My friends were like, ‘Leigh, you’re crazy. You’re literally standing in an elevator talking to yourself.’” By the day of the symposium, “I didn’t need my notes.

“Having presented this first in the classroom helped me so much. I focused on memorizing my words and making sure I conveyed everything accurately. I think this also will help me in future Model United Nations conferences. I will be more confident in public speaking.

“Just going through this process really helped my writing skills. And now I have a document that I can submit to graduate schools and I can use to argue [during conferences or discussions] in any sort of environment. In the end, all the work paid off. No matter what the outcome, it was a great experience,” Mumford said.

“The process of developing a research project with all of its constituent parts—research, writing, editing, and re-writing multiple drafts, and creating a presentation—is invaluable for undergraduate students,” Bass said. “Regardless of major, our most successful students will be those who can use the power of the written word to convey ideas, and to confidently express those ideas to others.  The Undergraduate Student Symposium is an excellent opportunity for our students to work on all of these invaluable tools.”

“Leigh’s research was incredibly creative and bold,” Bass said. “She took a new and different tact in trying to understand the rhetoric of terrorism which combined her political science background along with working with Dr. Star Vanguri on elements of rhetoric as well. The finished project was really indicative of the type of superb work being done by undergraduate students at NSU. Leigh should be very proud of her finished product and presentation.”

Click here to read about other NSU student experiences at the Undergraduate Student Symposium.